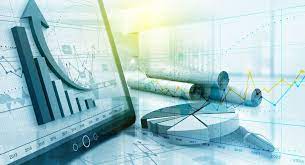 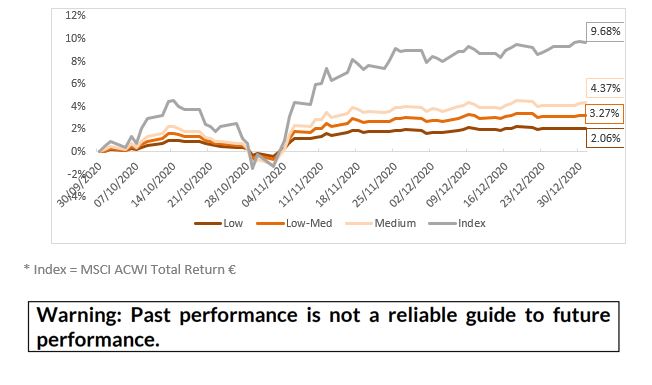 Acumen & Trust’s portfolios rounded off an extraordinary year by any standards, with all portfolios finishing in positive territory over the quarter and over the full year. As mentioned in our Quarter 1 performance review, those who stayed invested emerged best from the deep drawdowns that we saw in March. Positive vaccine developments and the gradual emergence of clarity on the political front saw short term stock market volatility which had peaked again at the end of October, halve by the end of November.

The final quarter saw equities put in a very strong performance and lower volatility diversifiers such as Infrastructure and Alternative Asset funds provided additional support. Our belief in allocating across a diverse range of asset classes proved successful once again with most asset classes, with the exceptions of Property and Gold, gaining over the quarter. This diversification also led to smoother returns for our portfolios in comparison to the broader equity index.

Markets were severely worried once the long term damage to economic confidence became clearer in October. Some Emerging Market economies were more resilient as they could impose stricter lockdowns quicker, thus reducing the impact of the virus. The European services sector was deeply affected with Germany in enforced lockdown right through Christmas.

Meanwhile the leading manufacturing and service indicators showed the US economy to be in rude health. As Donald Trump himself was afflicted by the virus, markets were thrown into turmoil as to the likely outcome of the US Presidential Election, whether a US stimulus package would be passed and whether Brexit would conclude without a deal between Europe and the UK.

As November progressed and once the outcome of the US election became clearer, a rotation out of the stay-at-home stocks into the recovery-related industries: industrials, energy, transports and financials gathered pace, as did sectors deemed favourable to a Biden win, namely solar and renewables.

They were all outshone however by the jump in the shares of Tesla – the electric car manufacturer when it was announced the stock would join the S&P 500 in December. In addition there was the welcome news that roll-out of the first vaccines was on the horizon. The S&P500 overall was up more than 13% for November, its biggest monthly gain since 1987 and best November since 1928. UK and European stocks which had

been most severely impacted by the Covid crisis rebounded strongly too.

European Government Bonds made some gains in low volatility in light of the continued low interest rate accommodative stance taken by the European Central Bank.

The issuance of Corporate Bonds remained strong as many companies sought to borrow while they could to ensure they had enough cash to last them through a prolonged period of slow economic activity. Central bank buying of corporate bonds has kept the market moving in quarter 4. Defaults remain low and the asset class delivered modest gains.

The uncertainty regarding the outlook for Irish Commercial Property continues. Out of town retail centres had been prospering at the expense of city centre shops although this growing sector will also have been negatively affected by the quarter 4 lockdowns.

With the renewed confidence in Equity markets Gold fell to a 5 month low at the beginning of December and there is some suggestion that cryptocurrencies could also be benefitting at the expense of the precious metal. Gold recovered in December to finish 7% below its year high.